After my last post about not wanting to do Tucson next year, I received a bunch of messages about 'hanging in there, it's just the economy, it's the weather, etc.'. I realized that I may have given the impression that we tanked at the show and that was why we didn't want to do it.
The reason we don't want to do the show is that it is too long. We made money the first four days, then it was dead, with only vendors walking around. Thankfully, we did really good those first few days, so technically the show wasn't bad.
But here's the problem for us, when one of us leaves, it's really hard to keep up with orders, since we have two kids and no family around to help. This year, we had a huge increase in orders, both of us itching to get to work, but neither Greg nor myself able to jump back in till I got home  almost a week later - it was just really hard not to feel exasperated.
So, if you were concerned that Green Girl Studios was in a bad way, don't be, we are doing great. In fact, we are so busy, that I haven't had a lot of time to focus on the whimsical things that bring me such joy. Although, I did make a little string doll with the kids. His name is Trouble and he's a little mischief maker. I used cotton thread I dyed last summer and really nice wool felt. I'm longing to make an army of dolls. 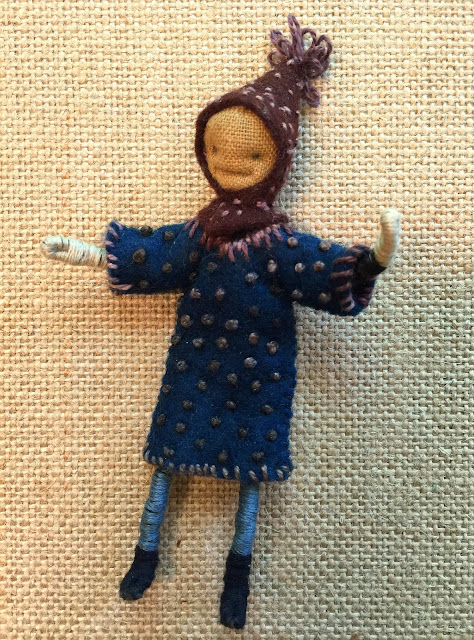 Anyway, we will be going back to the To Bead True Blue Show. We are thinking about alternatives, like doing workshops, and having a small show of handpicked vendors. This has been a dream of ours for years, so hopefully by the time we get to Tucson this spring, we will have something special planned for 2017.
Posted by Cynthia Thornton at 3:54 PM No comments:

Last week, my brother Andrew and his partner William came down from PA for a visit to Asheville! Yay! We always have so much fun. The kids couldn't wait for them to arrive, Max thought they'd love to play with his 'pet' caterpillars (he finds them and puts them in a big planter on the porch). 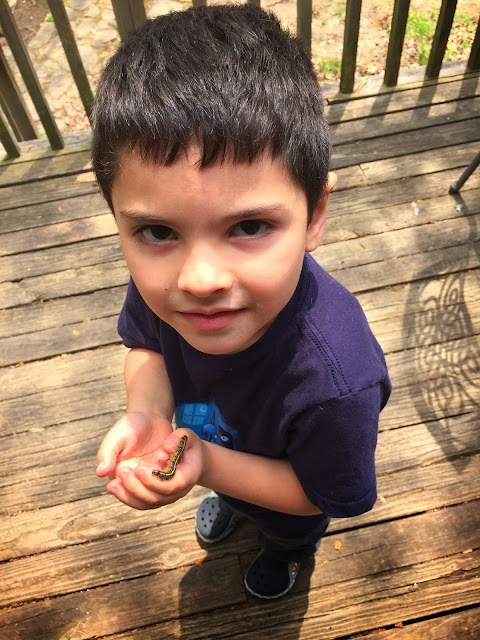 My boy is so sweet. I'm going to shirk my duties and cuddle him. 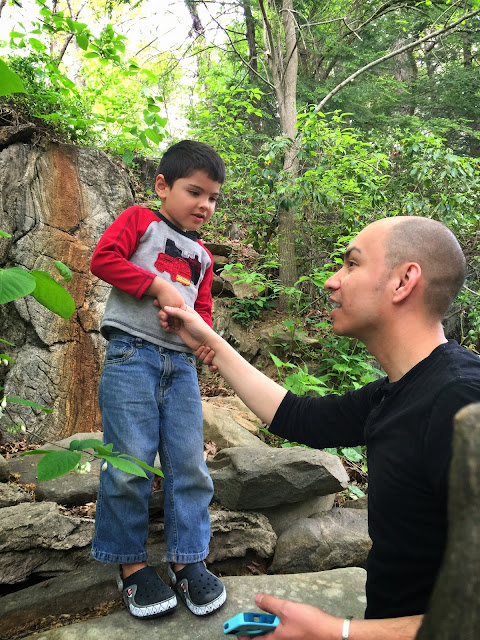 Here's Max attempting to pull up Andrew onto a rocky path at the botanical garden.  We found some really beautifully shaped flowers for reference. 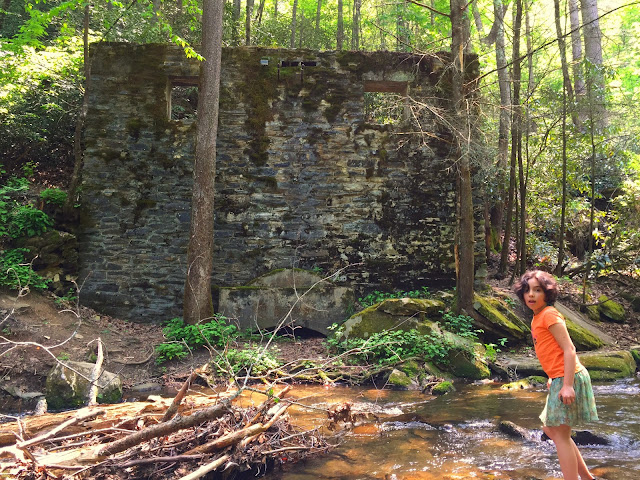 We found an amazing path up to a succession of waterfalls and had trying time wrangling the kids. They kept leaping and jumping in such a way that frayed my nerves. Like in this picture, the rocks are slick and that ruin looked like it was filled with creatures. 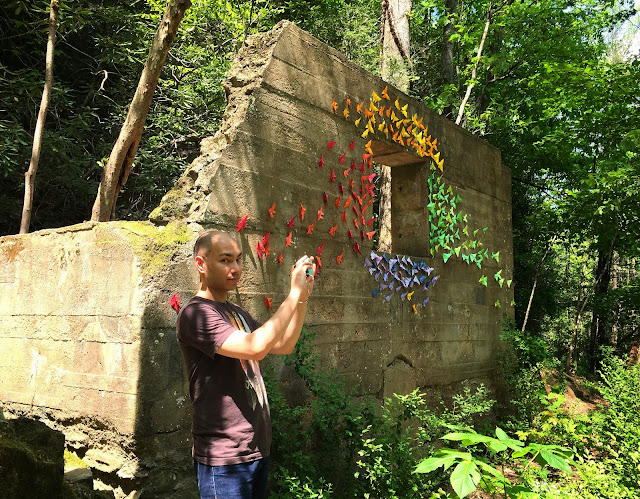 Someone made this installation of origami butterflies, so of course we had to have the kids pose. I made Andrew hold still. 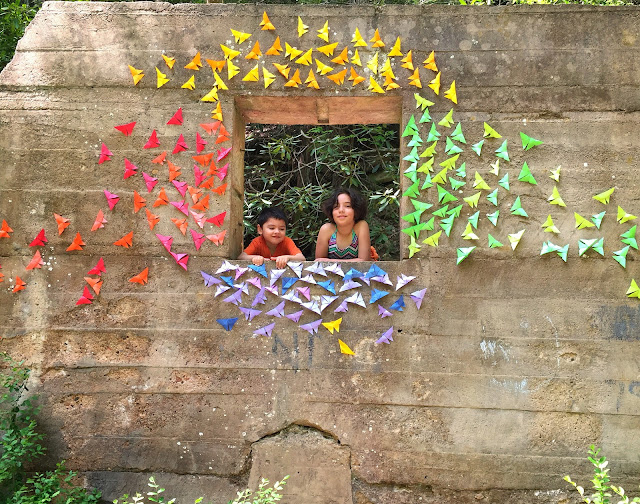 I love how the picture came out! 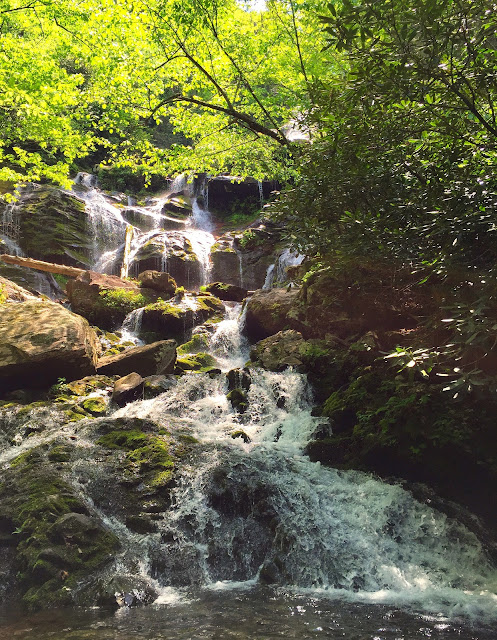 There were waterfalls all along the path and this one was near the end. It's hard to capture just how high this is! It might've been 50ft? I wasn't about to scramble to the top, I'm nowhere near as nimble as I once was! I couldn't bear the idea of bustin my hind end and carrying a doughnut cushion. 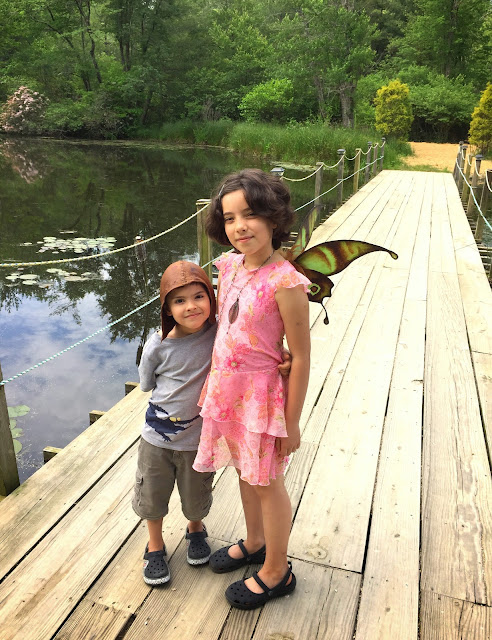 Don't the kids look super cute dressed up for the Fairy Festival? Max is wearing my painting cap. Yes, I have painting outfits, doesn't everyone?
We had such a great time, I kept annoying Andrew and William with pleas to live in Asheville, or at least pinky promise that we would all move to Hawaii to be together. We got a lot of work done, namely packing our classes for Bead and Button and making some really fun little collaboration paintings. Of course, we didn't touch all the things planned! It was only like 40 items or so.
Posted by Cynthia Thornton at 3:18 PM No comments: