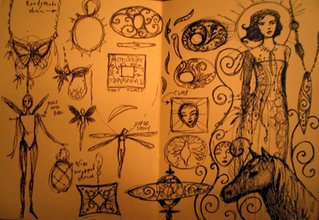 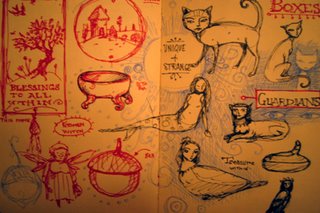 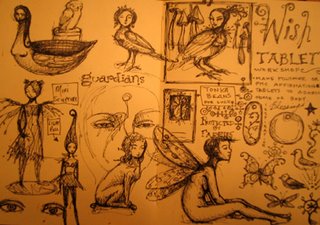 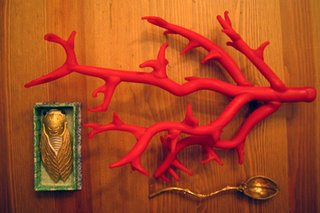 It's the holiday season, so it's been hectic around here (like everywhere else). We celebrated thanksgiving at our house in Asheville and the whole lot drove in from NY and FL to partake in the festivities. Andrew and Sheila brought apple pie and rice pudding from Rice to Riches (a rice pudding shop I love with every ounce of my being, www.ricetoriches.com) along with a bunch of gifts for my birthday (I just turned 32 on the 21st). We had loads of fun cooking and goofing around, not to mention eating like we had one day to live. Greg made a maple-glazed turkey and I made the sides: potatoes anna, green beans,candied white sweet potatoes, Weisel's spinach balls and gravy. I think I'm done cooking for a while, although I did enjoy making a roast in the slow cooker today.
These are sketches I made recently; ideas, new pieces, experiments. Gifts from Sheila and Andrew: glass repro of the coral in The Marriage of the Arnolfini painting, golden twig spoon for sugar, and gold-leaf ink pressed in the shape of a locust.
Posted by Cynthia Thornton at 10:00 PM 2 comments: 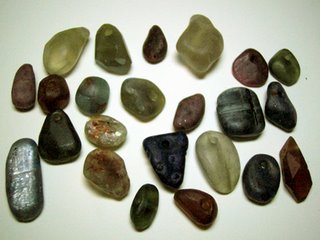 These are some rocks I carved: (top left)rutilated quartz, labradorite, ruby, r.quartz, ruby, moldavite,(next row) ruby, orange garnet, kyanite, labradorite,ruby, kyanite, sapphire,(last row) kyanite, labradorite, 2 sunstones, moldavite, lapis, garnet,lab., sapphire and garnet. Carving (some)rocks is very relaxing, therapeutic almost. I have a lap grinder and it makes shaping stones easy, the only hard part is drilling (some will shatter). It's a time consuming hobby, but I like carving stones especially for a jewelry piece and giving it as a gift, like an amulet. I can't make them for sale because of how long they take, and I can hardly bear to part with them. They seem magical to me, comforting to hold. I plan to drill a bunch tonight, after Azalea is asleep. I almost finished the texture tool molds today, but I'll finish them tomorrow, I need to do something fun right now. It's pizza night and I'm excited about that.
I've designed loads of new pieces for tucson (new clasps! connectors! Yay!) hopefully I can make them all by february. I've misplaced a few bracelet masters (my desk isn't messy, it's just full) which are supposed to debut in tucson, they'll turn up in some weird place (those pixies!). Maybe I'll try making some rings...I just shudder at having to stock sizes.
Once again our designs are getting ripped off, this time by a company called Oriental Trading.com. I guess they liked our bead holder so much, they cast mine and are now selling it online. I wish I could send them a s**tbomb with a letter lecturing them about how it's bad kharma to steal (especially from artists just trying to make a living). But I won't, just a stern letter asking them to cease and desist or get sued (and then a s**tbomb, even if my lawyer advises against it). I should be used to this crap by now, but it still bugs me. It strikes me as severly lazy (a quality I hate)-why can't the losers sculpt their own bead holder? So, if you want to annoy these creeps as much as I do, email them some hate mail, letting them know they are snatching the food from my babies mouth (feel free to be just as dramatic) www.orientaltrading.com. We would really appreciate any irritating comments in their in-box.
Well, before I get too fired up, look for Greg in Virginia this weekend, he's
doing Jane's Bead Mercantile Show. If you've never attended one of her shows, try to visit one next time they're in town, they are small, but have a good variety of vendors. We do nearly all of her shows. We have only two more shows before our season ends, then we can relax and make fun stuff. I'm hoping to take a trip (one that is pure leisure-no beads!) maybe we can find some cheap tickets to Fiji or Thailand (we found round trip tickets to Rome for 300$ once!) so we can decompress after this year of working like maniacs. Sheila will be in Burma, suffering like a monk at a retreat (and loving it), so maybe we can visit her there. Expect to see her new work at our tables in tucson! Well, I think the pizza's here, good night!
Posted by Cynthia Thornton at 7:16 PM 3 comments: 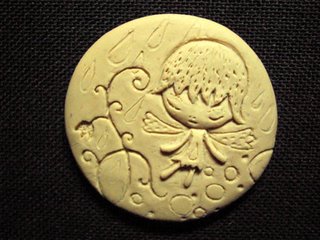 New piece! Inspired by my friend Jeremiah Ketner's painting ' This could be something special'. This is part of a line I'm creating for his small and round work, to be sold in galleries and on his online shop. I hope he likes it. I have a couple of little figurines on my work bench, just armatures right now, but soon to join an army of odd ball characters from Jeremiah's wonderland. O.k. back to work.
Posted by Cynthia Thornton at 10:37 PM 3 comments:

Hi! Things are good here, insane busy since Stringing Magazine hit news stands last week (our flying heart pendant is right smack in the middle of the cover). Greg has been spinning beads, filling orders, and pouring silver non-stop. I have been a nice wife, cleaning house, cooking, teaching Azalea new words like 'fried chicken' and doing nothing GGS related. I'm tired of hard work. So I took a break, I have been writing every chance I get (whenever that child is asleep!) and things are looking pretty good. I am unbelievably rusty (art school made me stupid-but I can draw) so its slow going. I feel really guilty, like I'm indulging in some luxiurious way, reveling in my make-believe world. When you run your own business every second of your time feels like you should be working - because you're sure you will go bankrupt if you don't. I should be making new molds, starting new pieces, designing finished jewelry....but I think my brain needs to release this energy, or I might pop. I'm on chapter 3 (amazing!) and I'm enjoying myself immensly. It is as fun as painting or sculpting and equally as frustrating. The biggest problem is forcing myself to go to bed, I'm naturally a night person, but the little nugget is an early riser so I'm on her schedule.
Tomorrow I will make molds! All this fun, people will think we're a bunch of liberals or something (and they would be right)! Moldmaking is a pain in the ass. There is no nice way of putting it- you can spend hours (and generally you will) building a mold, only to discover afterwards that there is some flaw, some reason you have to do it again. I hate making molds, even if I am good at it, but I will because there are like 500 people waiting for their swirly texture tool. I promise I won't start a new project until they are done, even though I have been obsessing over making dolls again. I went through a stage of making loads of doll parts, heads, hands and tiny feet with shoes sculpted on (I LOVE sculpting little shoes, its like making the shoes I wish I had), my desk would look like Vlad the Impalers battleground with all the little parts on sticks, except without all the impaling. Since I'll be making molds anyway, I might as well cast my tiny house sprite ( a little fey person that lives in the unused parts of peoples houses, doing nice things, like running off roaches and finding change), I have all the parts and she is super dang cute! If I can find mine I'll photograph it, but I probably won't, because everytime I say I will put pics of something up, I don't finish it, or my computer won't let me, so I can only post pics by surprise. I think I will make a jointed fairy doll in pewter! I should start right now, so cute, so jangly! Or the day after tomorrow. Here is the word of the day: Boundless. Thinking of that word all day, what it means, what images it conjures...oceans, space, autumn skies...anyway have a good night.
Posted by Cynthia Thornton at 11:31 PM 2 comments: 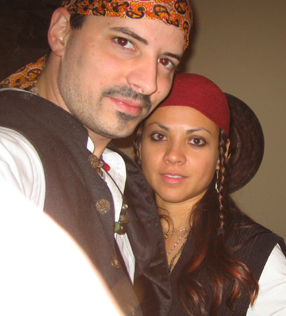 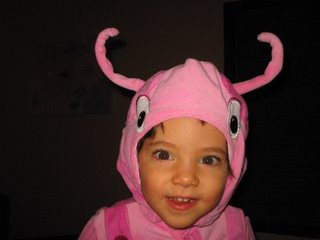 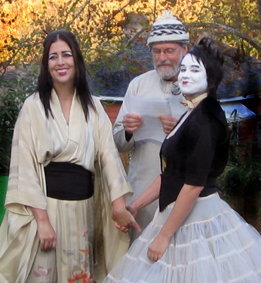 Hello! We have had a pretty good week here in Asheville. Walking around downtown, people watching, sketching and lots of coffee. Slacking you might say. It was our 2nd anniversary on the 30th, and we celebrated by eating sushi, playing outside with Azalea and pigging out on loads of Halloween candy. Two years ago we got married under the old oaks at the botanical gardens, dressed in fairy finery (it was a costume ball, of course),the night was warm, the party a swirling parade of masks. The photographer, Meg Riley (an extremly talented artist)and her partner Alisa became our good friends, and tied the knot on the 28th! They were inspired by the festivities at our wedding and decided to have a masquerade party as well. It turned out beautifully! Everybody dressed up and those without costumes could rummage through the mask box and find something to their liking. They both looked so lovely! Greg and I dressed up like pirates and Azalea got into a Uniqua (a character from the Backyardigans) suit and danced all night with a little Superman. We had a good time. So now we are back on schedule preparing for the big show in San Francisco this weekend.
Posted by Cynthia Thornton at 3:50 PM No comments: