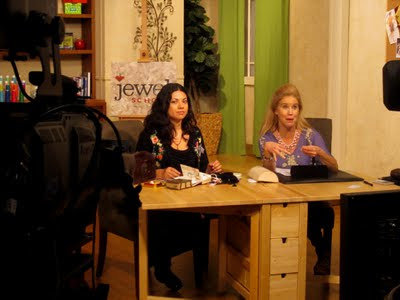 Can you believe GGS is a spotlight artist on Jewelry Television? This appearance has been brewing for a couple of months, negotiating time frames for filming in the studio and deciding which pieces to showcase. The whole process of going on t.v. is fairly interesting, a little stressful, but that's to be expected. I was a little nervous about talking on live t.v. but it turned out to be easier than I expected. One of the most nerve wracking things was doing my makeup! They instructed me to use a darker pallette, since the lights tend to wash people out. I felt a little like a drag queen, since I rarely wear makeup and even then its just a bit of eyeliner. The heat under the lights was startling, not to mention the numerous cameras. Looking into the right camera at the right time took some practice, but I think I did o.k. I dreaded going on the show, but it turned out to be a fun experiance. As soon as I get a copy of the segment I'll put it on you tube. 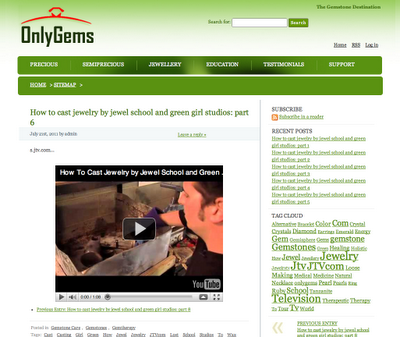 Here's a still screen of Greg demonstrating a bronze casting, that jtv used on the show. He cleaned the studio for almost a week in preparation of the camera crew! I think the video looks great! I told them that Greg was way more comfortable in front of the camera and far more photogenic, but they wanted me to talk (which I thought was surprising, since I've been told I have a sort of dry personality). Anyway, we really enjoyed working with all the lovely folks from j.t.v. and I especially enjoyed the tour of the huge warehouse filled with beads and gemstones!


Posted by Cynthia Thornton at 4:23 PM

Congrats to you! So exciting!

Whoo hoooo! I can not wait to see it!

WOW!! This is so exciting! I would have been so nervous too!! Greg looks like a natural, and to be honest, I am truly amazed, as I never ever knew what goes into making your beads!! I love them EVEN MORE now!

Can't wait to see it too!

Cannot wait to see you!! You looked absolutely beautiful on stage!
Greg wow that is alot of work, even more than I imagined. That was a really super clip! So much involved to the process wow. Thank you so for sharing we would never of known!!

Enjoyed watching Greg cast, and am looking forward to your segment.

Congratulations, you are now a movie star! I think it's wonderful and can't wait to see the episode, you look beautiful on the still!

My Life Under the Bus said...

Congratulations! I don't even think we get this : ( I can't wait for the You Tube!

My Life Under the Bus said...

Your husband is a natural! It's fascinating to see a piece get made!

congrats GGS! what a great opportuinty....and every girl needs to feel like a movie star sometimes:)
sorry i missed you this weekend. i hope max is feeling better.