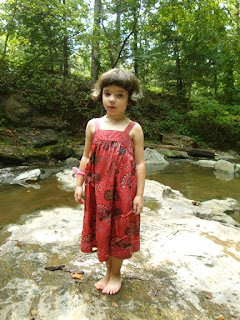 Hello! Here's a pic of Azalea after she fell in the river! It's really more of a creek where she slid in, but still amusing. Lately, we've been taking little excursions to go drawing out in the world, packing our 'action packs' (which consist of sketchbooks and pens) and some food. I'm really enjoying this new activity, sitting quietly together and documenting ideas and dreams. It reminds me of art school, a time when I was carefree and optimistic...not the jaded and overworked adult I became. I find this interesting, since I have more responsibility and more aggravations that should be burning a hole in my stomach, but it doesn't seem to penetrate my shield. Perhaps its the daily wonder of watching a child learn and grow that's forcing the rest into the background. 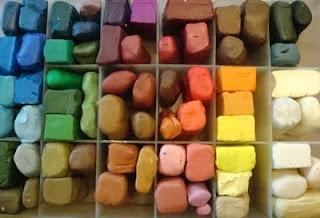 I am somewhat absorbed with organizing my art supplies until they are more interesting than the actual art. For example, blending, conditioning and forming these nuggets of clay took hours of work, but at least my travel clay kit is very tidy and complete. For me, my traveling art packs must be well-edited, yet containing everything I might need, should the inspiration arise. One of the most annoying things is to need a certain pen, or wish I had taken my watercolors! I tend to fixate. 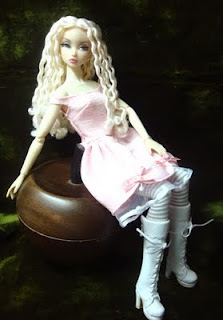 Look at the new girl! A Fashion Royalty Misaki doll from Japan that I repainted. I love her. She's small, about the size of a Barbie, but so poseable and cute! Some of you may be wondering when I'm going to get back to the business of being a bead maker. Well, soon! I just have to get this doll painting out of my system. Its pretty much doing the fun part of a painting, combined with being a make up artist. I like it so much I did three more! 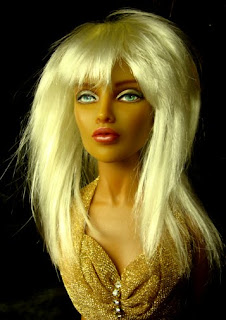 This is a different sculpt, a bigger girl ( 16") also from Fashion Royalty. Andrew said she looked super tranny glam before her makeover! 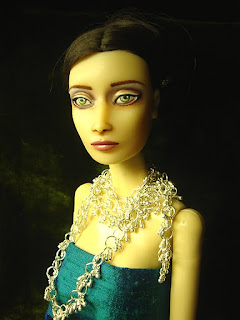 This doll is from Paris, from a company called Fashion Doll Agency. They are strange and rubbery and really posable, which I like. 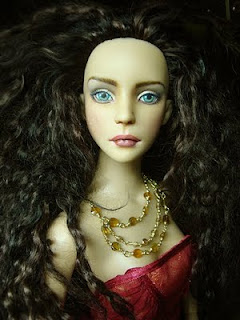 This girl was a gift from Anne Choi, a 16" Tonner Doll, with beautiful mohair replacing her vinyl tresses. She was the first in my collection and the last I painted. I wanted to be fairly confident before I started her. This is an addictive hobby! She's wearing a piece Andrew made with green garnets, tiny rough diamonds and gold wire. Its fun to use the good stuff on such small pieces, a little goes a long way.
I'm getting used to this new schedule of rising early and having hours of quiet to make things. I'm learning how to budget my time so I can do things I couldn't normally have done, like having a friend over and socializing uninterrupted. I invited Kathy Van Kleeck over to check out my lapidary equipment and I had a great time showing her my collections of specimens and stones. I rarely meet other rock enthusiasts, so it was a real treat.
One thing that's challenging to get used to is the constant changes my body is making. Every day there's some new thing to adjust to, like nose bleeds or how my hips are stretching. That business is painful, so much so that some days I can hardly walk. Its a strange limbo I'm in, waiting for this new stage of my life to begin. I almost feel like another person, one I don't recognize when I catch a glimpse of myself. I wonder what life will be like when the baby is born, will I maintain calm? Will I recover my former self? I can't wait, yet I'm content in limbo, if that makes any sense. Well, I have till late October before everything changes.
Posted by Cynthia Thornton at 9:20 PM 14 comments: 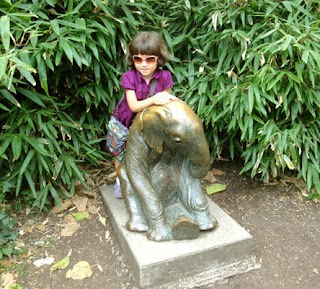 We spent Labor Day weekend in Cincinnati, enjoying fine weather and good company. First, we went to the zoo, which proved to be surprisingly good. 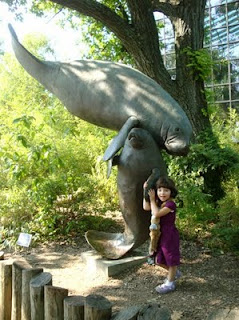 I particularly enjoyed the Manatee house! There were two beautiful creatures floating gracefully in a habitat that looked just like Blue Springs! It was calming to sit and watch them swim among lillies and silvery perch. 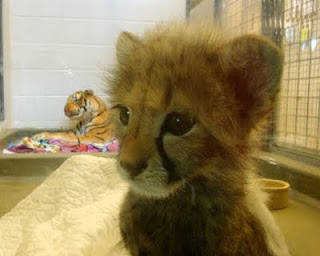 In the nursery, we couldn't get enough of the baby cheetah! We annoyed it by cooing and making kissing sounds at it, till it came up to the glass to see if we had lost our minds. We had. I love you Baby Cheetah. 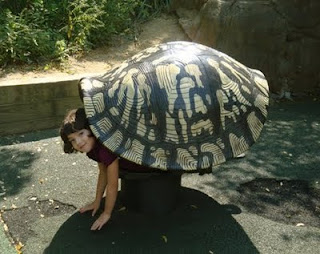 Look at my girl posing as a turtle! I really liked this sculpture and wouldn't mind having one in my garden. 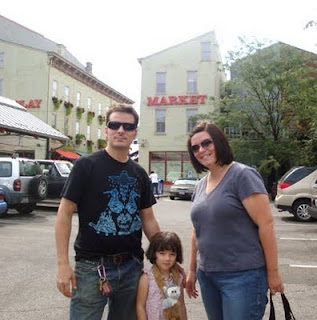 The next day we ventured into the city to check out Findlay Market (Greg, Azalea and Jenny pose in the parking lot). While it looked charming and I did enjoy the crepe and honey vendors, I found it lacked something. I think I might be spoiled from going to so many mind-boggling markets across the country. Or it could be that Jungle Jim's is in the area and it pretty much dwarfs the little market, offering a staggering array of everything and being reasonable too. Yes, I'm spoiled.
We had such a good time with Greg's mom, Anne and his sister Jenny! It seemed like the whole weekend was filled good food and a lot of laughter. Our good friend Jessica came down from Columbus and I was in heaven, as she is one of my favorite people. It's days spent with people you love, enjoying simple things that make life so wonderful. We are looking forward to our next trip!
It's quiet here, Azalea is at school and Greg is in transit to Tucson, AZ for the Fall Best Bead Show. If you're in the area, stop by and say hello! I've polished off a mess of chores and its not even 1 yet! I feel particularly useful today. Now I'm trying to mentally prepare myself for the Realm of Chaos that is my studio. I will clean it today....
Posted by Cynthia Thornton at 11:22 AM 2 comments: 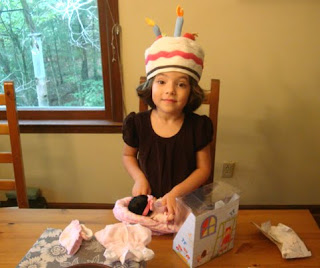 This girl made out like a bandit for her birthday! We made her ration her present opening, for our amusement, which sounds mean, but was actually fun. She had to wait a little between gifts, so she'd play with whatever she opened instead of ignoring the pile in favor of one thing. 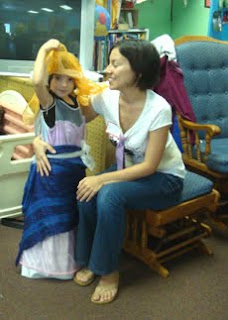 We started the birthday festivities by coming to school to deliver rice crispy treats and to watch her play at recess. My girl loves dress up so much! We didn't recognize her when we first walked in, she was covered from head to foot! Sheila came for her birthday and joined in the fun, allowing the kids to dress her capes and crowns. 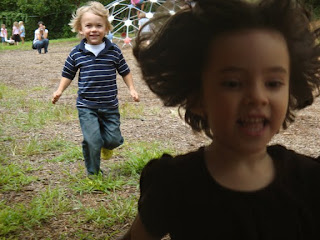 It was fun watching her play tag with her best friend. Those kids pretty much ran full speed for an hour. 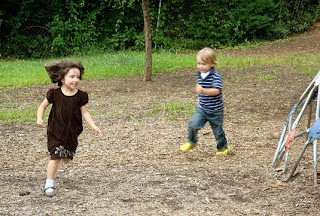 We enjoyed watching all the drama of kindergartener antics - alliances were formed and broken, sides switched and all was forgiven in moments. It was cute. And tiring. Just watching them and I needed a snack and a nap. Which is pretty much what I do all day, broken up with bursts of productivity, like making making blackberry jam or drying fruit in our fancy new dehydrator. Greg and I are very interested in food lately (more than usual) and picked up a couple of appliances we've long wanted, like a deep fryer and dehydrator. Greg made fried fish, southern style, coated in cornmeal. Our goal is to perfect my Grandma's Fish fry, fried chicken and fries. Can you tell we like our fried food? We dried bananas and strawberries and they came out jammy and sweet, exactly how I like them to be. Our next experiment will be with watermelon, which when dried, condenses into a sweet, candy-like substance. Sounds good to me.
In pregnancy news, I have two months left and look like I have one week to go. Probably because I drink sweet tea like its my job, which makes my belly gigantic and I hobble around in an unflattering shuffle, due to my pelvis widening. Oh well. Lately, we like the name Maxfield (since I like Maxfield Parrish), since Maximus is too old Roman for Greg. I was all about Marcus, but then realized it was derived from Mars, the god of war. I'm one of those gals that believe in the power of names and don't want a war-like scorpio baby. So, we are still deciding and will probably name him after we get a good look at him. But, Max does mean 'the greatest' and that's a good thing.
Posted by Cynthia Thornton at 9:02 AM 8 comments: