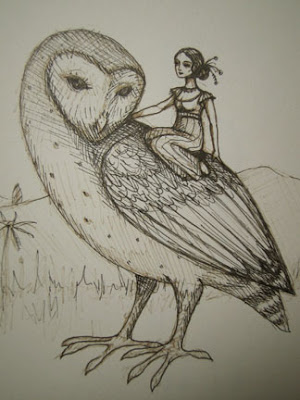 Hello! Here's a little sketch I made while thinking of Jane Austen. I'm obsessed with her lately, reading Sense and Sensibility and watching the BBC movies. I'm sure she would have thought this image completely improper. Oh well.

We went to Michael's today and picked up new pens from Martha's collection (made drawing with them). I love both Martha and Michael's and could spend hours there, but today I was tired so Greg took me home and took Azalea to the Fun Depot. I needed the quiet to work on a few projects, so it was really nice. I'm still sick which is supremely annoying and worst of all I can't smell anything. It also means I can't taste much. I had a caprese sandwich earlier and I couldv'e been eating lunchmeat for all I could tell. I may freak out if this continues tomorrow, I can't bear the thought of not tasting my dark chocolate covered macademia nuts.

It's weird around here, lately. We took Bob to the airport so he could get back to SanFran and check on his boat and Sheila's STILL in L.A. (she must have fallen in - something my grandma would say) so it feels sort of quiet. I like having company. It works out since I hate to leave the house. I only leave if its necessary, like for food or to a show. So how am I supposed to go the Phillipines? Well, I've been working up to the idea for along time, considering it carefully. Thinking of shots and what to take (this alone could take months, what bag? what shoes? can I bring food? books? art supplies?) nerve wracking, I know.

It's puppy time tomorrow! We pick her up at 4pm in Charlotte! Yay! We are so excited! Hopefully, Frick doesn't lose his mind and poop right on the spot. He is extremely sensitive, he doesn't like change, or anyone to leave or anyone to call him 'fat' - he's just big boned at 20lbs. I measured him from nose to base of tail 21in. tail length 13 in. see? Just a big boy who is spoiled and poops on my stuff when he doesn't get his way. We think that he will accept the puppy as its a girl dog and he usually hates boys. I will update the situation as it unfolds. Well, we are getting ready! Good night!
Posted by Cynthia Thornton at 10:06 PM

ooh good luck with the puppy! I put a picture of our zoey on the top of my blog so you can see her.

Live the bird drawing. I really admire your drawing skills, they are just gorgeous, the things you do...

I love the sketch. I'm heading to Michael's myself today! Good luck with the puppy!

::LOVE:: the drawing...I love Jane Austen...and owls are always a favorite when your name is Sophie (i.e Greek meaning wisdom or a shrew...my personal favorite interpretation!)...so beautiful...I'd love to have somethign with that drawing on it...hmmm...the marketing brain is working...

I got the picture of the puppy and Azalea Greg sent me--so CUTE! What's funny, though, is on Friday Brandon and I adopted our own puppy. He's a bit bigger, though--a 79 pound German Shepherd. He can't stand the cats, so we're having to train him out of that, and he's still got a lot of puppy traits, but at least he's housebroken. We can compare puppy stories in preparation for our plan to get knocked up together.